In September 2017 I was invited to Kazakhstan to give a cross-cultural seminar to the Beeline Telephone Company in Almaty.  This prestigious company is known as Veon internationally, especially in Moscow and throughout Central Asia.  It has a multi-cultural staff.  Delegates attending the seminar were from Russia, Ukraine, Armenia, Georgia, Uzbekistan, Kyrgyzstan, Tajikistan and Kazakhstan itself.  They had a high level of cultural knowledge, particularly pertaining to those countries that were former Central Asian republics of the Soviet Union, as well as the Middle East, Turkey and Eastern Europe.  They knew less about Western cultures, but showed great interest in them.

I was stunned by the beauty and impressive location of Almaty itself, the historical capital. (Astana is the new capital since 1997). Almaty, which the foreigner sees just as a dot on the map, now hosts a population of 2 million people and is a thriving, bustling metropolis adjacent to the Tian Shen mountain range boasting peaks of between 4000-7000 metres immediately overlooking the city.  Sightseeing on the first day, our hosts whisked us up 3 funiculars to a chic mountain-top restaurant where we lunched in an atmosphere considerably more rarified than that of Mexico City, known for its breathless moments.  Above us we glimpsed the beginning of the range of beautiful gorges, lakes and glaciers of south-eastern Kazakhstan.  The frontiers with China and Kyrgyzstan lie a mere 50 miles away. 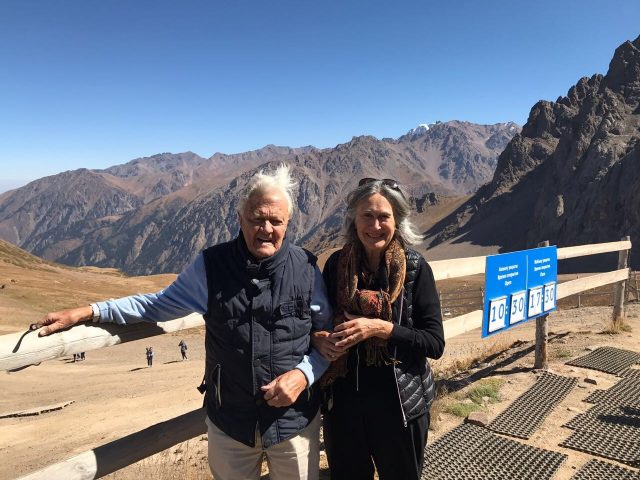 My wife and I were housed in the fabulous 30-storied Ritz-Carlton Hotel, reputedly the finest in Central Asia, affording a matchless panorama of the city centre and mountain backdrop.  Almaty, spread out over a sprawling area, features wide, well-kept boulevards and arterial highways, mostly lined with a plentiful supply of birch, beech and evergreens. Like London, it has many parks.  You can’t fail to be impressed by the city centre with its glass-sided tall buildings dominating the skyline.  Old buildings are few, owing to the effects of an earthquake in 1887.  There are many first class restaurants in town, two of the most memorable being the Abay, overlooking the whole city from an elevated, hillside vantage point, with the world’s only second set of statues of the Beatles a few yards away and the Alasha, serving classical Kazakh dishes to the accompaniment of wild folkloric singing and dancing with a few jugglers and tight-rope walkers thrown in.

Kazakh cuisine is heavily based on the nomadic past of the Kazakh people and is dominated by meat, especially mutton and horse, and various milk products, including tasty cheeses and kumiss, a drink of fermented mare’s milk.  The signature dish of Kazakh cuisine is beshbarmak, which means “five fingers”.  It is generally served in a large dish, placed in the centre of the table.  It involves large lumps of horsemeat or mutton, boiled on the bone, which are scattered across a bed of pasta.  Onion rings, garlic, parsley and fennel complete the dish.

During a dacha lunch, I, as the guest of honour, was presented with a sheep’s head to cut into pieces to distribute around the table.  The sheep’s left ear was to be given to the youngest member – our host’s grandson.  It is supposed to make him listen to his elders better. 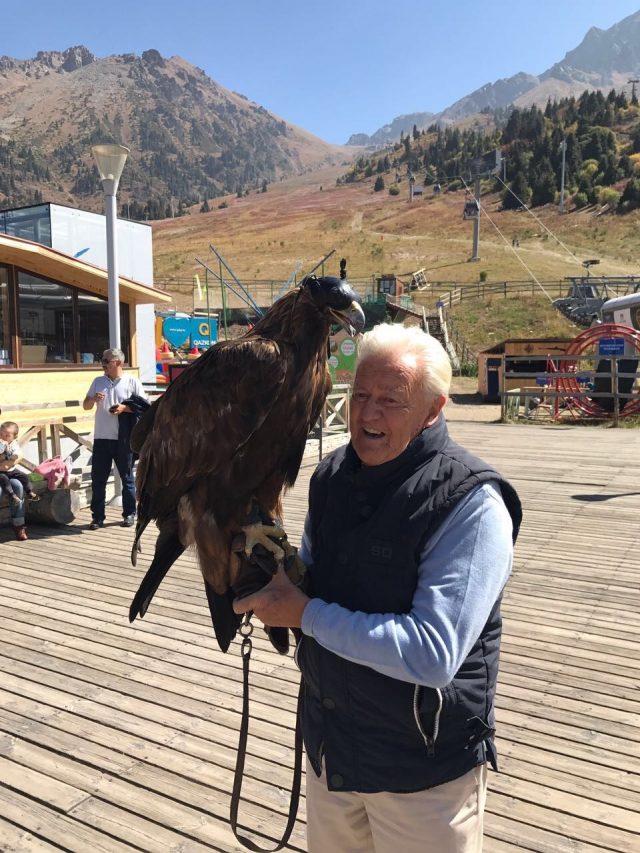 While Kazakhstan comes across as a vigorous, modernistic, forward- looking nation, the visitor constantly feels their pride in their exotic, nomadic heritage, their love of tradition, artefacts and ornamentation.  This is evident in their national costumes, elaborate jewellery, folkloric singing and dancing, their ubiquitous yurts, attentive, unrestrained hospitality, their intermittent shyness.

In my seminars I made much of the centrality of Kazakhstan both in terms of geographical location and strategic cultural integration.  Looking at a map of Europe, one sees Germany as the centre – its beating heart.  Look at a world map, in particular the huge landmass of Eurasia, and Almaty is dead centre.  If you draw a line on the map from London to Tokyo it passes through Almaty, which is equidistant from both.  Drawing a vertical line through Almaty from the Arctic Ocean to the south of India, it is equidistant again.  Kazakhstan is the 9th biggest country in the world (the size of western Europe) and links with the world’s great cultures – Russia to the north, China to the east, India and the “stans” to the south, Turkey in the southwest and meets the Western powers in the Caspian oil fields.  Felicitously, its environments are benign.  A former Soviet Republic, Russian is Kazakhstan’s interethnic lingua franca; they share Silk Road aspirations with China, the friendly ”stans” are linguistically accessible, as is Turkey – the first country to recognise them as a new nation; with the Westerners, business is mutually profitable.

With such relations, and its extensive territory and mineral wealth, Kazakhstan seems destined for a bright economic and international future.  President Nazarbayev insightfully mentioned Finland as a model for development – a country situated between east and west, friendly with both, achieving an economic miracle through high standards of education and embrace of technology and innovation.  Post-war economic miracles have been witnessed in Germany, Japan and the 4 Asian Tigers (Korea, Singapore, Hong Kong, and Taiwan).  Kazakhstan would seem well placed to emulate these nations in due course.