Welcome to the Riversdown Blog – An Interview with Richard D. Lewis 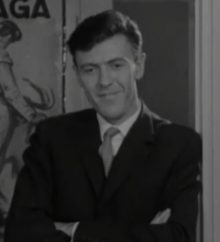 Since 1971, Riversdown has been home to one of the leading English language schools in the world, providing total immersion courses to visitors from over 65 countries. In this inaugural post of the Riversdown Language Blog, the founder and creator, Mr Richard D. Lewis, answers a few questions on the origins and history of the school.

What was your inspiration for starting Riversdown House?

Before opening Riversdown, I had already worked in the language training industry for over 15 years with experience of running schools in Paris, Finland, Norway, Portugal, and London, as an employee and franchisee of Berlitz – a major force in English training at the time. In 1966, I went to Japan and spent 5 years opening 6 more schools on their behalf in the East Asian region. One of the major challenges in Japan was teaching students in conditions which were not ideal for learning a language. In Tokyo, for example, most of the students had spent over an hour travelling into the city from the suburbs so were already hot and flustered by the time they sat down in the classroom! Frequent interruptions from their work superiors calling throughout the day distracted them from their studies and, although they all worked hard and improved their English, the progress could never be as great as if they had been completely immersed in the language. So, my vision was to create a school which teaches English in the optimal conditions.

What are the optimal conditions?

To be away from all possible distractions in a quiet and peaceful place in the countryside – somewhere relaxing and comfortable with a typically English atmosphere, and with individual tuition with native English speaking teachers, reinforced with group communication exercises and evening activities. A truly immersive experience in language and culture.

How did you create these conditions at Riversdown?

I was very lucky because Riversdown was only the fourth property I looked at and it had everything we needed. Although it was built in 1328, it had been renovated in the 1930s and so in 1971 it was still in good condition. Since then we’ve added bathrooms to the bedrooms, a gym, a sauna, 3 tennis courts and a 9-hole golf course to the property, with a resident pro who gives lessons to the students. One of the external buildings was perfect for a conversion into the teaching and office building with 16 classrooms and an area to relax during breaks. 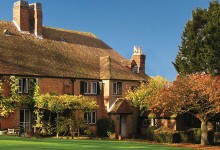 What advice you do you give to students at Riversdown?

Immerse yourself completely in the concept and imitate your teachers and the models they give you. They are all very experienced so can constantly adapt to the needs of the student. Speaking, trying, and imitating is the same way I learned foreign languages. I speak 10 languages in all, those being French, Italian, Spanish, Portuguese, German, Danish, Norwegian, Swedish, Finnish, and Japanese. With Japanese in particular, people often say that it’s a very difficult language to learn. There is no such thing as a difficult language, only those which are close to, or far from, our native language.

What are some of your fondest memories of Riversdown?

There have been many and we’ve had many memorable students. We’ve hosted Japanese royalty, Prime Ministers from Finland and Denmark, members of the German government, CEOs of major corporations, sportspeople and football coaches.  I’ve also seen how Riversdown has the effect of neutralising prejudice and bringing down social barriers. People of all walks of life, professions, backgrounds, and nationalities are able to become friends after a week of studying together. I’ve even seen people whose countries are at war become friends and stay in touch after they left!

What do you feel is your proudest achievement at Riversdown?

I have been very lucky that Riversdown has been everything I had hoped for. I’m proud that the vision I had from the very beginning came to fruition and in 46 years we have successfully taught over 40,000 people from 65 different countries, many of whom have been back to visit us several times as members of the Riversdown family. 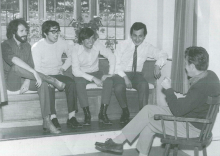 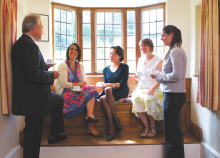